Getting the guide map "KURE where Suzu lived" from Kure City.

Suzu, the main character in the manga and animated film "In This Corner of the World", used to live in Kure City.
Today, you can come and visit some of the locations where this story took place.
Use the guide map, "KURE where SUZU lived", to tour around Kure and enjoy these popular tourist spots. 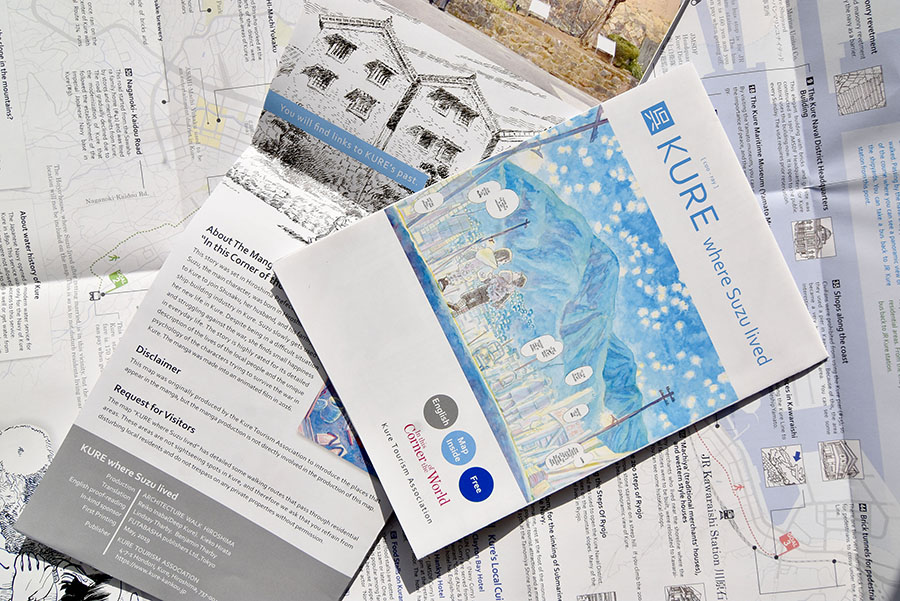 PDF
for your mobile phone

PDF
for print
in Japanese

About The Manga "In this Corner of the World"

This story was set in Hiroshima Prefecture, in the 1940s. Suzu, the main character, was born in Hiroshima and went to Kure to join Shusaku, her husband, and his family in the ship-building industry in Kure. Suzu slowly gets used to her new life in Kure. Despite being in a difficult situation and struggling against the war, she finds small happiness in everyday life. The story is highly rated for its detailed description of the lives of the local people and the unique psychology of the characters trying to survive the war in Kure. The manga was made into an animated film in 2016. 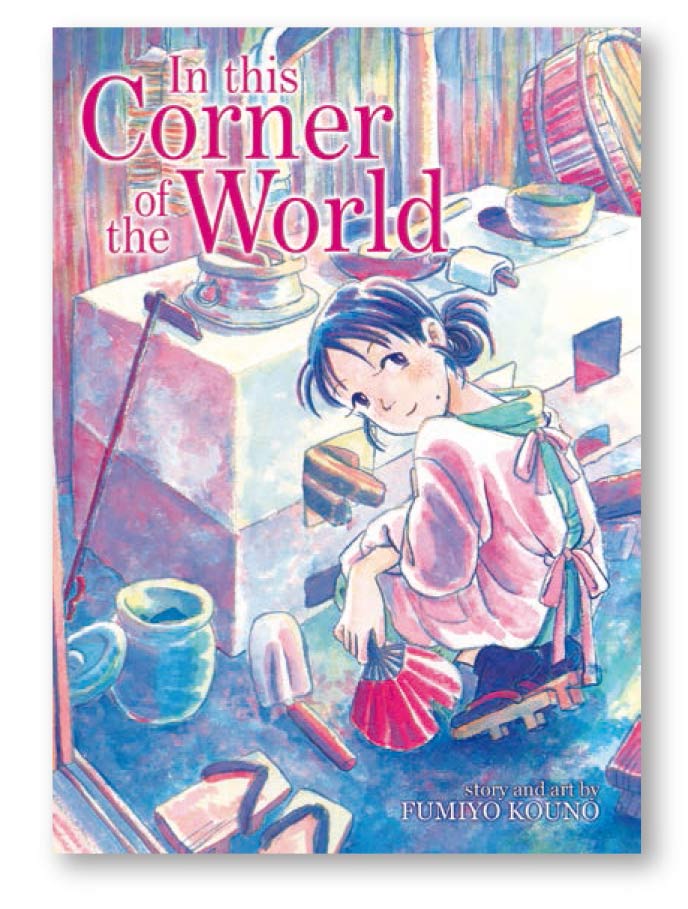 The manga "In this Corner of the World", later made into an animated film, depicts Kure in the latter stage of WW2 and was written through the perspective of people living in Kure city.
So, what is Kure like ?

The History of the Modern Navy in Japan

First of all, we have to know about the history of the modern navy in Japan to understand Kure.
In Japan, a more modern government was established after political change in the late 19th century, and it began to develop a navy modelled after the navy of the United Kingdom. The Japanese navy became the third largest in the world (after the UK and US) in the 1930s. However, Japan lost the war and the Japanese navy was decommissioned. The new constitution of Japan proclaims that Japanese people must renounce war forever, but in 1954 the Maritime Self Defense Forces (JMSDF), quite similar to the navy, were established and still exist to this day.

The Construction of Kure City

Kure used to be a small village made up of some rural areas. Kure is on the Seto Inland Sea and is surrounded on three sides by many hills. To go outside of the city, there were only a few narrow, steep roads. These geographical features prompted the Japanese Government to establish a naval base, and in 1890 a naval port was built. The navy also led the city planning of Kure. From the 17th to 19th century, land was reclaimed from Kure's bay and used as farmland. On this land, the navy constructed roads that formed a grid. Huge numbers of soldiers and factory workers moved to Kure and the population rapidly increased. Therefore, houses had to not only be built on flat land but also on the hill sides. During the war, the central part of the city was a very busy downtown hub. There were lots of buildings such as restaurants, theaters, shops and pool halls that were crowded with sailors. Also, civil infrastructure such as trams and waterworks were developed.

Before the modernization of Japan, there was no technology to build a large facility using bricks and iron. It was necessary to master the Western techniques. Kotaro Sakurai, a Japanese architect who studied abroad at the University of London, was an excellent student and became a member of the Royal Institute of British Architects. He designed some wonderful naval buildings such as the Kure Naval District Headquarters and the Former Official Residence of Commander-in-chief.

The Flourishing and Decline of Kure

As the Japanese navy grew, the naval port in Kure was getting bigger and eventually it became the biggest naval port in the east. The navy dockyard was world-class in terms of its scale and technology and a lot of battleships and aircraft carriers were built here. The population of Kure increased to become one of the ten largest cities in Japan.
However, this prosperity did not last long. During WW2 (1941-1945), many of the naval facilities were destroyed by US military air strikes. Indiscriminate bombings of heavily populated civilian areas occurred. After Japan's surrender in the Pacific War, the Australian, New Zealand, British, and the U.S. army was stationed in Kure for several years. The naval base was taken over by the Maritime Self-Defense Force (JMSDF) and the navy dockyard was sold to private companies.
Suzu, the main character,"In this Corner of the World", moved to Kure at the height of the war. She saw how the city of Kure had changed since the peak of its development.

Kure was seriously damaged during the war, however, thanks to the high level of shipbuilding expertise, the city has recovered to become the vibrant industrial city it is today. A few naval facilities and old houses still remain. Walk with this map and try to imagine for yourself the city of Kure that Suzu must have seen ! 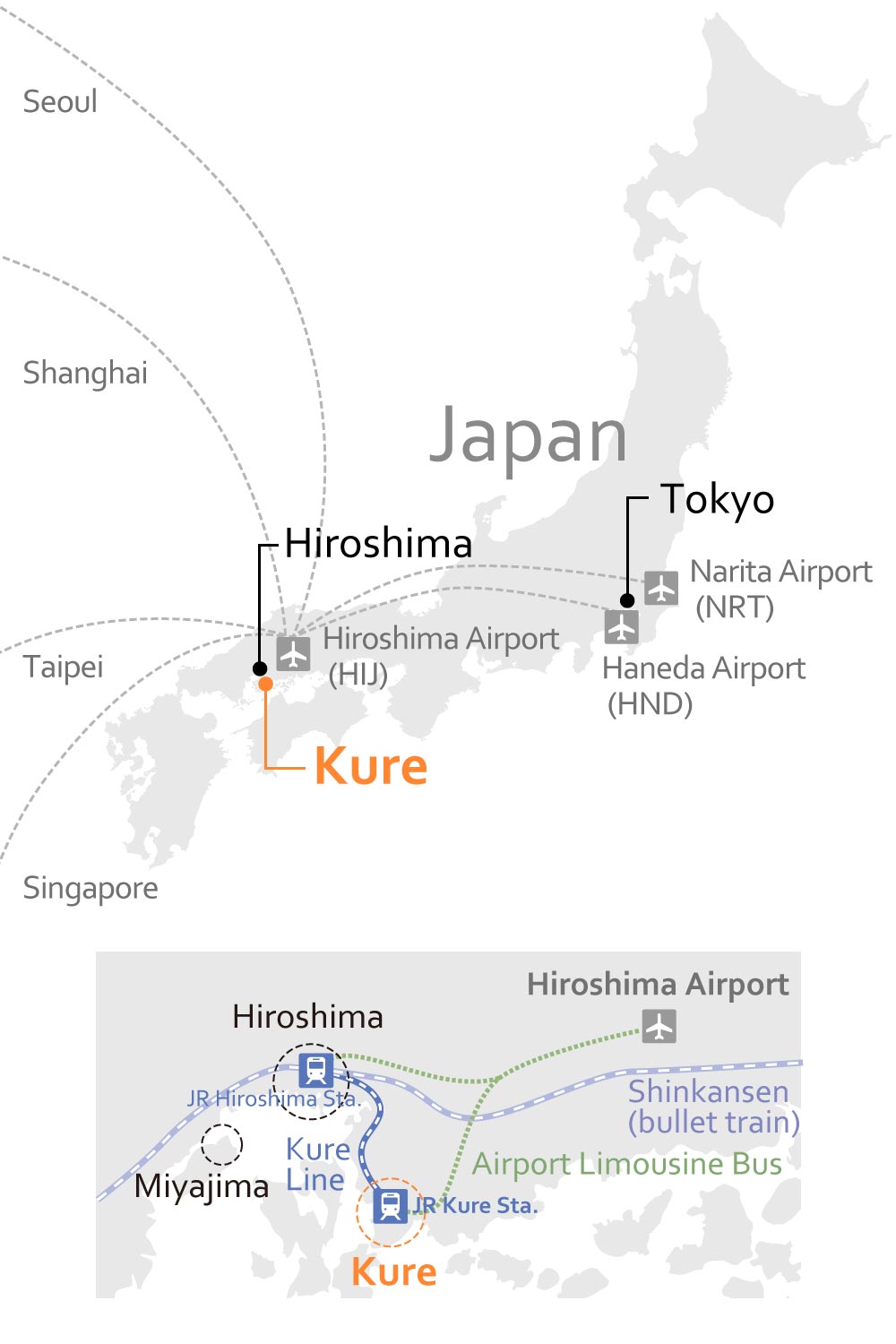